Last week I focussed on writing tips, posting a new one each day from Monday ’til Friday. This week, I’ll be writing a new and original flash fiction each day, so make sure to check it out and let me know what you think! If you missed my posts from last week, you can check out writing tips one, two, three, four, and five by clicking on those links.

A Strange Man At The Piano Bar

“I’ve been to a carnival before, but never one with a piano bar,” Laura said, speaking loudly to be heard over the rowdy music pounding out from the larger-than-life piano to the right of the scarred, wooden bar.

Laura tapped her fingers against the pint glass in front of her. Overhead, the blazing August sun was filtering through the faded tent canvas dyed red, yellow, and blue. The dusty light danced in spirals all the way down to the peanut shell encrusted packed-dirt floor. Two other couples stood at the bar, faces solemn and bored.

Tyler was half-turned from her, leaning against the bar, and staring through the entrance to the sweaty crowds outside. Children screeched, the carousel music looped around and around, and electronics beeped and blared from the games in nearby stalls. Laura thought she might go insane.

In his hand, Tyler held the candied apple he’d bought a few minutes before they’d found this strange bar, an obscure haven in the screaming chaos.

Laura cleared her throat, tried to think of something to say and just felt awkward, helpless. The accident hung between them like a tragic veil – a curtain that prevented them from connecting, from reaching each other. For her, it was part guilt and self-loathing but also hopelessness. On his side, there was obviously disappointment and maybe hate towards her. He’d been cold to her since the incident. She couldn’t blame him.

She watched him take another bite of the apple. Laura made to reach for him with the hand not holding the glass, but stopped when she caught sight of the cast. She’d suffered several injuries that night, luckily the worst of it was just a broken wrist.

He stared down at his apple, giving it a twirl between pinched fingers, before taking another loud crunch out of it. He thought she’d crashed the car on purpose. She knew because she’d gone through his phone, read his text messages to his sister.

He thought she’d done it because of the pregnancy. He didn’t know it was because Laura knew about Candice, about the late-night meetings, about the other pregnancy.

Ignoring the cast, Laura reached for him again, determined to make a connection, to get his attention, to have him truly see her. Her fingertips had just brushed his sleeve when she recoiled with a cry, jerking away from the hideous caricature of a human face that had popped into her view, peeking up from beneath her arm.

She fell back against the bar, feeling the wood dig into her spine. From her right, she heard someone gasp, followed by the harsh bark of a short cough. Laura forced herself to laugh. It was just a man wearing a stupid mask, a tall man dressed in a billowing red- and white-striped jumpsuit and oversized red shoes that squeaked as he bounced from foot to foot. On his bald head he wore a red hat with six points, each adorned with a fluffy white pompom. The mask was the creepiest part; it was fashioned as an over-exaggeration of a man wincing. The cheeks, forehead, and chin were painted yellow and lined heavily with carved wrinkles. The eyes were wide apart, unnaturally large with tiny red dots for pupils. The lips were thick, red, somehow wet-looking. Looking at it gave her an uncanny dread despite the man’s comical hops and skips.

He giggled – a young, juvenile sound from such an aged-looking mask – and bent down on one knee. This action was slow, he seemed to sink through invisible molasses to reach the ground. Slipping one hand into the oversized sleeve on the other arm, the man pulled out a daisy and thrust it up towards her. The daisy bobbed, ascending in painfully slow hours. Laura took it, if only just to get rid of him sooner. Even her movements were slow. Her good hand drifting down to the stiff stem one millimetre at a time. As soon as her fingers pinched the flower, though, the spell was broken. He stood in real time and giggled again, pointing to the right and behind her.

Tyler lay on the ground dead, hands clutching his throat, his lips blue, and eyes bulging grotesquely from his skull. The candied apple lay to the left of his head, already browning with oxidation.

Hop you enjoyed that little work of fiction! Be sure to stop by tomorrow to read another.

As always, show me the love by liking and sharing!

7 thoughts on “Flash Fiction: A Strange Man At The Piano Bar” 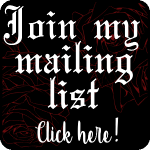