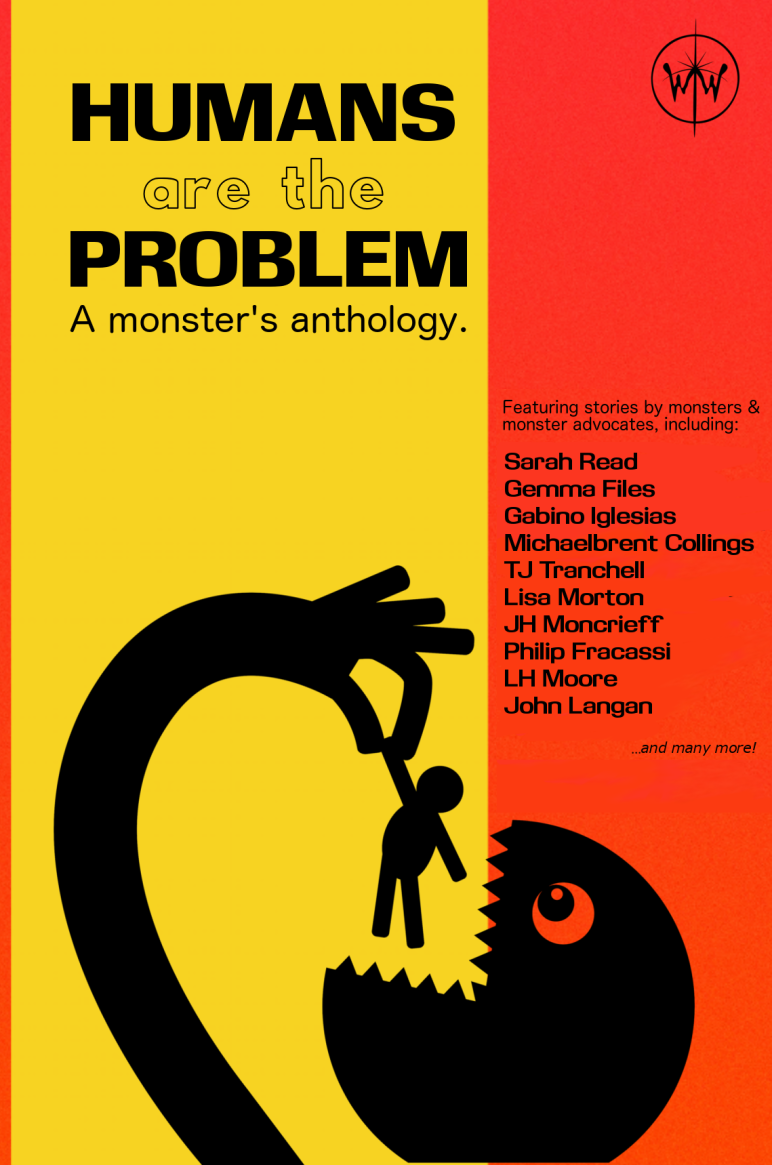 Welcome back to my regularly scheduled review!

As I mentioned in my little update post last Thursday, I might not be able to post two reviews every week for a but, but as soon as I am able, I’ll try!

Also, if you haven’t yet, be sure to check out the stories I wrote in October for a writing challenge I did!

Now to start, I did receive a free copy of Humans are the Problem to review, but all opinions in this blog post are my own. Onwards!

Michael Cluff, Editor-in-chief: When he isn’t writing his own fiction, Michael edits for other writers and creates anthologies, such as the one I am reviewing today!

I am caught in that realm between Nerdom and Geekery. I think I am smart, but math and I don’t get along well enough for me to begin to hold my own against rocket scientists; so I can’t be fully nerd. I know the difference between Marvel and D.C., but I can’t always say which character belongs to whichever of the two; so I can’t be fully geek.

Willow Becker, Editor: Willow is a horror and sci-fi writer, but also has publishing credits in the business of writing and creative nonfiction. Her works have appeared in Space and Time Magazine and Black Fox Literary Magazine.

Willow Dawn Becker has spent the last 15 years as a writing teacher, marketing director, sales manager, radio show host, professional actress and car salesperson. Her goal in life is to work as many minimum-wage jobs as she can before she dies, and live to write about them.

Monsters have been mocked, maligned, and besparkled by the insidious human horde. In these horrifying tales, monsters and monster advocates reveal how they are adapting to stay scary and finding innovative ways to navigate the 21st century to feed their appetite for human flesh. With over 280 pages of bone-grinding, tongue-biting, claw-raising monster stories from some of the biggest names in horror, this is an anthology that promises to tame even the hairiest monster fever.

With twenty-two twisted tales, Humans are the Problem: A Monster’s Anthology is a collection of stories that explores the question; what if the real monsters are the people? From trolls to tooth fairies and boogeymen to blobs, these monsters have to get creative to deal with the modern-day human!

Let’s take a look at the table of contents:

I was really excited to receive a copy of Humans are the Problem and dive into its its unique take on classic monsters — I was surprised that, along with its tales, there are some black-and-white illustrations for some of the stories as well.

The collection as a whole started off pretty strong with a story about the tooth fairy that had a spin to it that was really surprising — “Root Rot” was a great story to start off with!

Overall, there were some definite gems and I’ll call out my favourites in a moment below. Of the twenty-two stories, most of the them were good, but a few definitely fell flat (I DNF’d a couple, if I’m being honest). I think the thing that disappointed me the most was that some monsters were repeated. I would have liked to see twenty-two original takes on twenty-two unique monsters, but there were some duplicates, like the two stories about trolls and the two about vampires (I was extra disappointed about the duplicate vampires since those blood-suckers are so overdone already).

Which were my favourites?

“Root Rot” as mentioned already. It was a great opening story, gritty, haunting, and a unique take on the tooth fairy lore.

“Aquarium Diver” was another one that really stood out, highlighting a monster that I’d completely forgotten about and giving it a cosmic horror twist to it.

A gritty tale about exorcisms/shadowy figures, “On This Side of the Veil” had a brutal ending that really took me by surprise.

“The Man of Seaweed and Reeds” takes a wickedly humourous spin on another monster that I wasn’t expecting to see. I loved its dark notes of wit and gore.

“The Fingernail Man” really freaked me out. Is this an actual cryptid? Either way, set in a future where little boys and girls really don’t want to be bad, this tale will haunt you afterward.

Humans are the Problem is definitely a fun take on the relationship between humans and monsters. Again, I would have liked twenty-two unique monster stories, but this is still a good collection for monster fans out there.